By Douglas Stewart on February 13, 2018 in Uncategorized

In a location that was even more remote than I had expected, I visited the layby where 21 shots were fired and three members of a UK-Iraqi family were murdered. One daughter was uninjured, hidden beneath her mother’s body in the rear of the family BMW. Her sister was shot in the shoulder and hit on the head but survived. In the road was a French cyclist, also executed.

Det. Insp Todd “Ratso” Holtom would have loved being brought in to such an international investigation.

Ever since that day, the French and British police have sought to uncover the motive for a mass-execution. Theories abound from this being a local issue where the family were collateral damage to the murder of the cyclist to the reverse where the cyclist was an unlucky victim of a planned and cynical murder of Mr Al-Hilli and his family by a trained assassin.
The warning sign at the start of this steep single-track road leading up into the French Alps near Lake Annecy is no encouragement to drive up there, even on a sunny day, let alone like I did in wintry conditions in January. The family were not dressed for hiking – more like for an afternoon jaunt from their camping spot near the lake.
A witness confirmed that the family suddenly switched camping sites and that a suited man was involved in a confrontation with Saad Al-Hilli at the campsite – hitting the bonnet of the car as he left.
Was there something in Mr Al-Hilli’s background that verged on top-secret? This has been denied officially but that does not mean that it is not true. There were also some family difficulties with the brother but nothing suggests that such a complex crime to arrange could sensibly point in his direction.
Locally, as in many small communities like the nearby hamlet of Chevaline, passions can run deep and theories abound about local intrigue leading to the shootings using an old Luger. Such a gun was found in the house of a suspect but the owner has never been charged.
In August 2017, five years later, the police linked these murders to a possible French serial killer but again no charges have been preferred.It has been described as the perfect murder. Perhaps it is and to me that points more to something sinister surrounding what Mr Al-Hilli officially did and what else he may have done. The remote and curious location adds to my suspicions that Mr Al-Hilli was lured there for one purpose but whoever invited him had other plans in mind. perhaps the suited man knows the answer. You don’t get many folk dressed like that on a Frech campsit 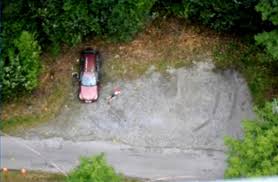