By Douglas Stewart on July 15, 2015 in Uncategorized 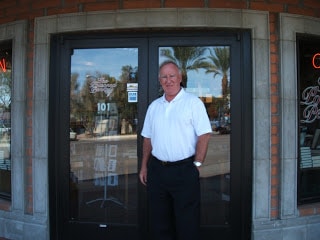 “One of the great unsolved mysteries, or so it seems to me, is why there are so many crime writing attorneys in the US, and yet relatively few from Britain. Is it because we are worked much harder in the UK? Having talked to some very industrious American lawyers, I’m sure there must be some other reason! But I’m not sure what it is.

One senior British lawyer who has also written a number of crime and thriller novels is my pal Doug Stewart (pictured outside the legendary Poisoned Pen book store in Scottsdale when he and I spent some time in Arizona together.) Doug is, like me, focusing increasingly on his fiction, and I am delighted to host this contribution from him. Do take a look at his sites, by the way, where you will find much of interest, including some attractive offers: Here is welcome news, not only about his latest book but also of a forthcoming updated version of a title in the legendary Collins Crime Club series.

“What a privilege to be invited to guest-blog on Martin’s site! As fellow solicitors I can remember reading a review in a legal journal of one of his early Harry Devlin books and making contact. We have remained friends ever since. From the wings, I have watched him juggle his impressive legal career with his development into a doyen of crime and crime fiction – both underpinned by his encyclopaedic knowledge.

In contrast, having taken early retirement as senior partner of a London firm, I gambled on a future devoted mainly to writing and based in Las Vegas. Life there was great and inspired a thriller (Late Bet) but overall the bet was lost. I returned to Europe and once again mixed the law with my writing, albeit very enjoyably and only part-time. Happily however, the balance is tipping again towards my love of writing.

With the arrival of Amazon and eBooks, not only have I got publishers for my new books but several of my backlist have already been released as eBooks. One of my favourites was Cellars’ Market published by Collins Crime Club. Not only is the original to re-appear as an eBook but the publishers want me to write a revamped version to be updated and rebranded.

Besides Hard Place, a new mystery thriller just published involving Det. Inspector Todd “Ratso” Holtom, I have two more publications before the year-end. Having foolishly spurned wise advice in my early days to continue developing a series based on the same character, Ratso will star in another book now on the way and in a short story for inclusion in an anthology. Why “Ratso”? Because my aim is to create a brand – and given the power of Google, I wanted a name that would stick. For readers who will too quickly forget Douglas Stewart and Todd Holtom, hopefully they will not forget Ratso. That’s the theory, folks! You can email me on Doug@douglasstewartbooks.com or find me on Twitter (@DougSBooks), Facebook (DouglasstewartBooks) and on the web at www.douglasstewartbooks.com

Thanks again, Martin! And congratulations on The Golden Age of Murder, a true magnus opus.”