By Douglas Stewart on November 28, 2017 in Uncategorized

I am excited to see this book once again available after being silenced for almost exactly 30 years!
The story of Lusifren, a fictitious drug created by a fictitious drug company remains a compelling story of some of the dirty tricks that have been prevalent in the industry. 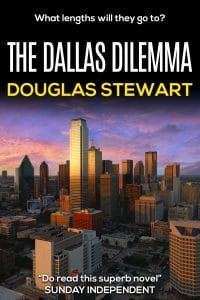 When White Lodge first published this book in the late 1980s and it was selling well, my Monday morning was spoiled on receiving a letter from attorneys for an American drug giant threatening me with a $10 million lawsuit for alleged defamation. I was confident that I had a good defence to the allegations and so did the publishers.

Unfortunately when I jetted over to the FDA archives outside Washington DC, the records on which I had relied had been removed (presumed stolen). Senator Edward Kennedy could have been a good witness on my behalf but he declined to get involved. Such records as I had were then supplied to an expert in the UK who fell onto a railway track in London and the documents were blown away. (There must be another thriller in what really happened involving the expert!).

Along with the publishers, we were left defenceless and rather than write a cheque for $10 million from the petty cash, we had to surrender and the book was withdrawn from the selling outlets. No Amazon or e-books in those days!
I’m delighted to see The Dallas Dilemma once again available. The words alleged to be defamatory have been deleted but everything else remains and I’m delighted that Endeavour Press are now publishing once again.