By Douglas Stewart on April 30, 2018 in Uncategorized 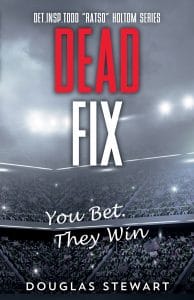 Following on from the Australian cricket team being caught cheating in a recent Test match in South Africa has now come the revelation that an Independent Review Panel set up in 2016 has established a tsunami of fixed tennis-matches.
In Dead Fix, my thriller about sporting corruption, I touched on tennis as having been infiltrtaed by organised criminals, some from Italy. This new report has established that fixing in tennis is reponsible for three times as much fixing as all other sports put together.
14.5% of players (464) admitted knowledge of fixed matches but the problem was dominated by lower levels of the professional game.
I can accept that this is so but my concern, as highligted in dramatic style in Dead Fix, is that once a player is known to be corruptible or corrupted, they can be blackmailed or exploited as they progress in the game up to Grand Slam events.
The Report noted that there was some evidence that a top player was permitted to retire from the game in 2003 to avoid public exposure. Perhaps more of the truth of this will emerge. A quick search on the web gave me a likely candidate